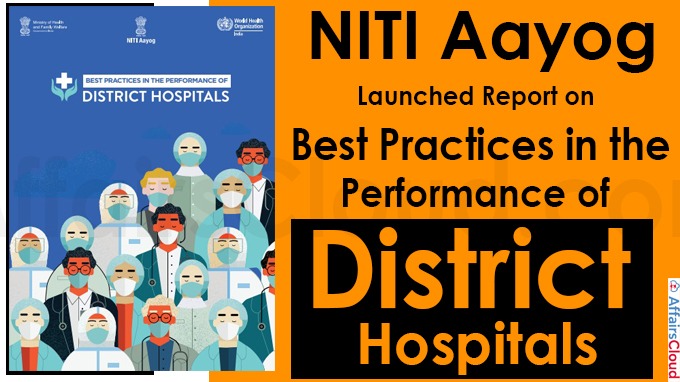 Key Points of the Assessment:

iii.The assessment report documents some of the best practices of the top-performing district hospitals in each of the hospital categories.

iv.Around 75 district hospitals across 24 States and Union Territories emerged as top performers based on the assessment of health indicators such as beds, doctors, nurses, diagnostic and health care facilities, bed occupancy, etc. Click here to know more about the report.

v.The report states that, district hospital in India has on an average 24 beds per 1 lakh population, with Bihar having the lowest average of six beds and Puducherry the highest of 222.

Based on Beds/ District:

NITI Aayog ties up with AWS, Intel to Boost Innovation

i.The studio will showcase the potential of technologies such as artificial intelligence (AI), machine learning (ML), Internet of Things (IoT), augmented reality and virtual reality (AR/ VR), blockchain, and robotics to accelerate their application in public sector use cases.

ii.Homegrown industry leaders such as MapMyIndia in geospatial solutions, Raphe mPhibr Pvt. Ltd. in unmanned aerial vehicles (UAVs), and the Centre for Advanced Research in Imaging, Neuroscience and Genomics (CARING), which delivers AI in healthcare and global leaders like Dassault Systemes are demonstrating their solutions at the studio.

iii.NITI Aayog encourages start-ups to take part in the studio in collaboration with the Atal Incubation Centres and the Atal Innovation Mission.

v.The NITI Aayog has set up a portal CovAid for tracking all aid coming via missions or by individual organisations.