At the invitation of Narendra Modi, Prime Minister of India, John Key, Prime Minister of New Zealand, undertook a state visit to India from 25-27 October, 2016. Prime Minister Key was accompanied on his visit by his wife, Bronagh Key, as well as a delegation comprising Parliamentarians. Business people from a range of sectors of bilateral significance, including innovation, technology and tourism; and representatives of New Zealand educational institutions and cultural organizations with interests in India.

John Phillip Key is the 38th Prime Minister of New Zealand, in office since 2008. He has led the New Zealand National Party since 2006. 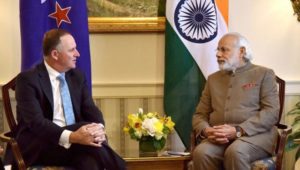 India and New Zealand have signed three agreements in the areas of double taxation avoidance, food security and sports.

India and New Zealand agreed to strengthen ties in key areas of trade, defence and security during talks between Prime Minister Narendra Modi.