On April 29, 2020 According to The National Aeronautics and Space Administration(NASA) asteroid 1998 OR2 a large near-Earth asteroid, measuring about 1.5-mile-wide (2-kilometer-wide) will pass by earth within 3.9 million miles (6.3 million kilometers), which is about 16 times farther away than the moon. 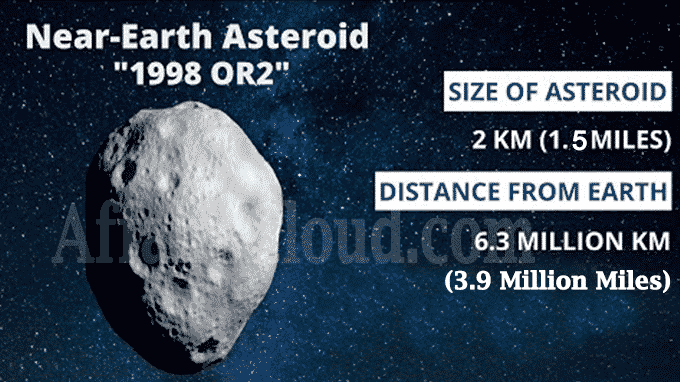 i.It was discovered by the Near-Earth Asteroid Tracking program at NASA’s Jet Propulsion Laboratory in July 1998 and for the past two decades, astronomers have tracked it.

ii.This asteroid poses no possibility of impact for at least the next 200 years & its next close approach to Earth will occur in 2079, when it will pass by closer, which is only about four times the lunar distance.

iii.Despite this, it is still categorized as a large “potentially hazardous asteroid” because, over thousands of years, very slight changes in the asteroid’s orbit may cause it to present more of a hazard to Earth than it does now.

i.The previous close approach by a large asteroid was made by asteroid Florence in September 2017 this 3-mile-wide(5-kilometer-wide) object zoomed past Earth at 18 lunar distances.

ii.On average a large asteroid of this size is to pass by the planet this close roughly once every five years. Since they are bigger, asteroids of this size reflect much more light than smaller asteroids and are therefore easier to detect with telescopes.

iii.Almost all near-Earth asteroids (about 98%) of the size of 1998 OR2 or larger have already been discovered, tracked and catalogued. It is very unlikely that one of these large asteroids will make an impact in the next century, but efforts are ongoing to find all the asteroids that could impact Earth.

What is a near-Earth object?
They are asteroids and comets that orbit the Sun, but their orbits bring them into Earth’s neighborhood within 30 million miles of Earth’s orbit.  More than 95% of these objects were discovered by NASA-funded surveys since 1998.