Hockey India President Narinder Batra was elected as the president of the International Hockey Federation (FIH) in Dubai on November 12, 2016.He 59 year old, defeated David Brinie of Ireland and Ken Read of Australia in a three-man race.

Batra, won majority support from Asian, African and Central American nations during the voting process. He is the first Indian to be elected as chief of an Olympic Sport’s international governing body. 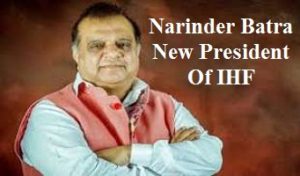 Narinder Batra, became the president of Hockey India in October 2014 after serving as its secretary. He is known to have changed the fortune of Indian hockey by bringing in money to the sport via sponsors.