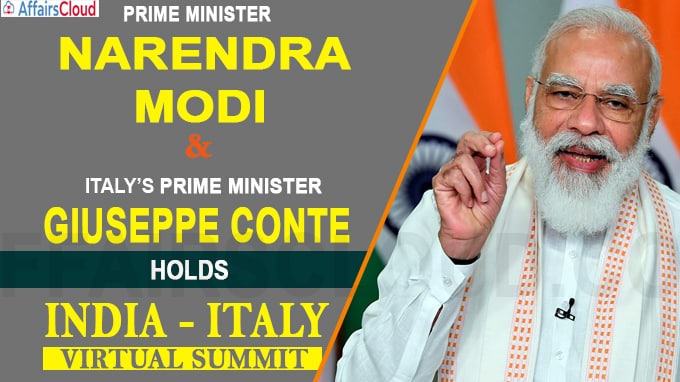 On November 6, 2020, an India-Italy virtual summit was held which was co-chaired by India’s Prime Minister Narendra Modi and Prime Minister of Italy Prof. Giuseppe Conte. Both leaders reviewed the framework of bilateral relationship and also reaffirmed their commitment to strengthen cooperation against common global challenges, including the Covid-19 pandemic.

In order to expand bilateral and strategic partnership the two Prime Ministers adopted the “Action Plan for an enhanced Partnership” which represents a framework of setting up of new instruments of cooperation and the streamlining of the existing ones. The action plan is based on the following 4 pillars:

–There will be further expansion of defence engagement within the framework of the United Nations through technology cooperation, co-development and co-production, by expediting discussions through the Joint Defence Committee and Military Cooperation Group.

–For cooperation in the health sector, there will be enhancement of consultations within the framework of the United Nations (UN) and the World Health Organization (WHO) amid Covid-19.

–Both sides satisfied with the implementation of various Science and Technology (S&T) activities India-Italy Executive Programme for Scientific and Technological Cooperation (2021-2023).

–Both leaders suggested that the Italian Space Agency (ASI) and the Indian Space Research Organization (ISRO) implement their cooperation by expanding some areas of common interest.

–Both sides agreed to hold the next meeting of the Working Group to further advance cooperation, exchange of expertise and capacity building in countering terrorism and transnational crime in 2021.

–In the framework of their greater coordination on global issues, the two Countries reaffirmed their commitment to the implementation of the United Nations Framework Convention on Climate Change (UNFCCC) and its Paris Agreement.

–Both sides cooperate in the run-up to the 26th Conference of Parties (COP26) of the UNFCCC, which will be organized next year by the United Kingdom (UK) in partnership with Italy.

–They also reiterated their commitment to cooperate in the field of disaster risk reduction and management.

–The two leaders agreed to work closely together for the success of the 16th India-EU summit to be held in 2021.

–There will be closer interaction between the Indian National Disaster Management Authority (NDMA) and the Italian Department of Civil Protection.

– The India-Italy Joint Working Group (JWGFP) on Food Processing will continue their operation which was devised in December 2017.

–There would be a Cultural and creative industries toolbox which will be a set of existing bilateral agreements and arrangements, including MoU between Venice La Biennale and FICCI, and among other relevant institutions, including museums and design institutions (La Triennale).

–15 MoUs were Signed in Various Sectors

The summit saw the inking of following 15 MoUs in various sectors:

On regional and international issues, both sides agreed to coordinate closely at multilateral fora especially G-20 (Group of Twenty). Italy will assume the Presidency of G-20 in December 2021 followed by India in 2022. Together, India and Italy will be part of the G20 Troika from December, 2020.

i.On October 26, 2020, Indian Institute of Technology Kanpur (IIT-K) in Uttar Pradesh (UP) and Archaeological Survey of India (ASI) have inked MoU with Italy’s Ca’ Foscari University of Venice, and Soprintendenza Archeologia, Belle Arti E Paesaggio, Venice for creating a network of sharing skills for restoration and protection of historical monuments.