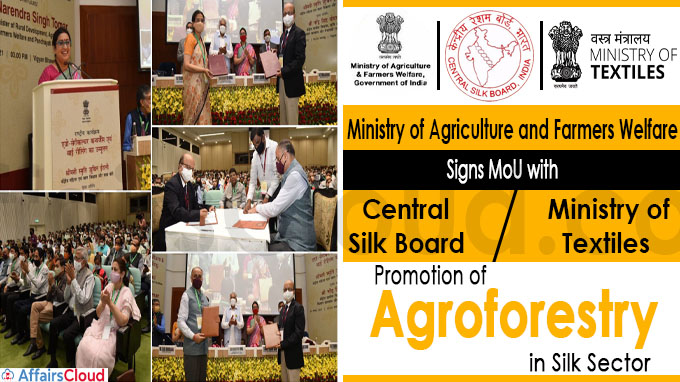 On March 7, 2021, a Memorandum of Understanding (MoU) was signed between the Ministry of Agriculture and Farmers Welfare (MoA&FW) and Central Silk Board under the Ministry of Textiles during ‘National level programme on convergence of Agro-Sericulture and eradication of Thigh reeling’ . As a part of MoU, there will be implementation of Agroforestry in the silk sector under the ongoing Sub-Mission on Agroforestry (SMAF) Scheme.

ii.To promote Agroforestry in the silk sector by Central Silk Board (CSB).

iii.The MoU will increase the agricultural income from 20 to 30% & already their income were almost increased to 60% by adopting Agro Technical Textile.

i.India will be fully Atmanirbhar in Silk production in the next two years.

ii.5000 women have already been supported under Silk Samagra Phase I.

i.The Buniyaad Reeling Machine for Tussar Silk Yarn were also distributed to some of the beneficiaries on the occasion to eradicate Unhygienic and Obsolete Thigh Reeling Practice.

i.Raw silk production in India has increased 35% in the last six years.

ii.India has become the second largest producer of PPE kits in the world.

About Sub-Mission on Agroforestry (SMAF) Scheme: