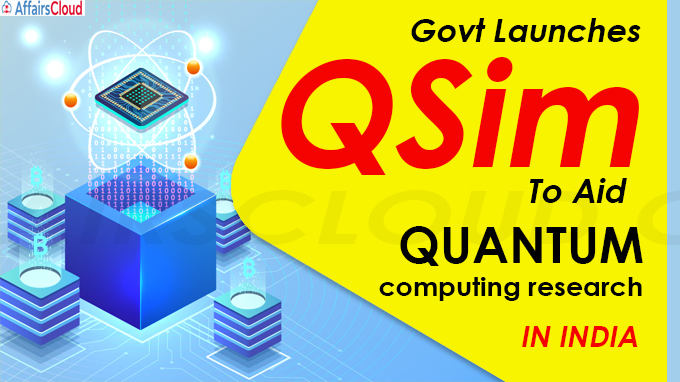 On August 27, 2021, Minister of State (MoS) Rajeev Chandrasekhar, Ministry of Electronics & Information Technology (MeitY) launched ‘QSim – Quantum Computer Simulator Toolkit’ during a hybrid event from New Delhi to aid and enable cost effective research in Quantum Computing. It will be utilized by students and researchers.

It is available in 2 models:

i.Quantum Simulators are devices that allow scientists to study quantum effects, which are otherwise difficult to study in a lab.

ii.As Quantum systems are highly sensitive to disturbances from the environment, QSim allows exploration of Quantum Algorithms under idealized conditions.

What is Quantum Computing?

It is the study of how to use phenomena in quantum physics to create new ways of computing. In a normal computer there is a bit, which can be 0 or 1. On the other hand, in quantum computing there are qubits which can be either of those, or a superposition of both 0 and 1, thereby enhancing the ability of computers.

Other Efforts by Indian Government to enhance Quantum Computing Research:

i.Finance Minister Nirmala Sitharaman proposed an outlay of Rs 8000 crore over a period of five years in 2020 Union Budget for the National Mission on Quantum Technologies and Applications.