Luis Suarez was awarded with the European Golden Shoe after scoring 40 goals for Barcelona last season and It is the second time he’s won the prize, having shared it with Cristiano Ronaldo two years ago.

Luis Alberto Suárez Díaz is a Uruguayan professional footballer who plays as a striker for Spanish club FC Barcelona and the Uruguay national team.

The European Golden Shoe, formerly known as the European Golden Boot, is an association football award presented each season to the leading goalscorer in league matches from the top division of every European national league. 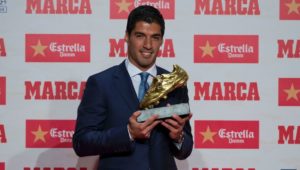