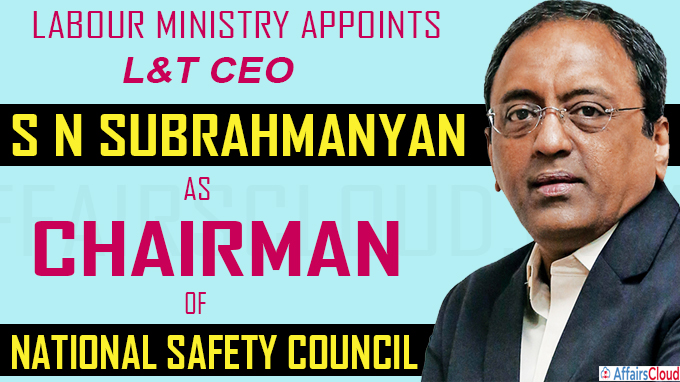 The Ministry of Labour and Employment has appointed SN Subrahmanyan, the CEO and Managing Director(MD) of Larsen & Toubro Limited (L&T Ltd) as the new Chairman of National Safety Council(NSC).

He will be holding the position for a period of 3 years.

i.SN Subrahmanyan, was appointed as the CEO & MD of L&T Ltd in 2017, prior to his appointment he served as the Deputy MD and President of the infrastructure business of L&T and contributed in making it as India’s largest and World 14th largest construction organisation.

ii.He joined L&T as a project planning engineer in 1984.

According to the All Asia Executive team survey conducted by the Institutional Investor, SN iii.Subrahmanian ranked as the Top CEO (Sell Side) and 3rd Best CEO (overall).

iv.He was recognized as the CEO of the Year 2019 by CNBC.

i.The major role of NSC is to ensure safety in workplaces under the new Occupational Safety, Health and Working Conditions Code, 2020 (OSH Code, 2020).

iii.The NSC also plays a major role in framing the scheme for 3rd party audit and certification under the OSH code.

The OSH code in India has not been updated for more than 50 years.

On May 20,2020, The appointments committee of the union cabinet appointed Govinda Rajulu Chintala as Chairman of National Bank for Agriculture and Rural Development (NABARD). He was the successor of Harsh Kumar Bhanwala.