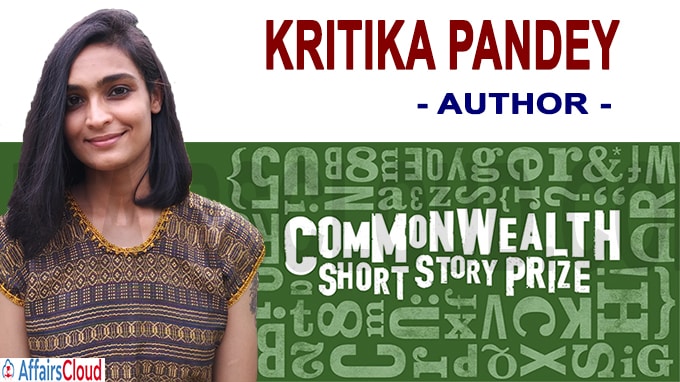 On 30th June 2020, The commonwealth writers announced Kritika Pandey, the winner of asian region prize as the overall winner of the 2020 Commonwealth Short Story Prize  for her story, “The Great Indian Tee and Snakes”. The award was presented to her by Ghanaian writer and editor, Nii Ayikwei Parkes, the chair of the 2020 Judge panel in the online award ceremony.

Kritika is the second Indian to win the overall prize after Parashar Kulkarni in 2016.

i.The prize is awarded to the best unpublished short fiction through commonwealth writers, the cultural initiative of Commonwealth Foundation.

iii.The stories of the winners of the 2020 Commonwealth short story prize will be published online by the Literary magazine Granta in partnership with the Commonwealth writers.

iv.Paper + Ink published the anthology featuring all the regional winners of the 2020 Commonwealth Short Story prize.

i.Kritika Pandey is pursuing her Masters in Fine arts at the University of Massachusetts, Amherst.

ii.Her works have been or yet to be published in Guernica, The Common, The Bombay Literary Magazine, Raleigh Review, and UCity Review.

iii.She was the recipient of the Harvey Swados Fiction Prize and the Cara Parravani Memorial Award for creative writing at the University of Edinburgh.

The Great Indian Tee and Snakes:

i.Its a love story of a Hindu Girl  who chose to fall in love with a Muslim boy knowing all the concesequences of her choice.

ii.Parkes commented that the story is a tale infused with empathy and balance.

iii.An extract of this story was read at the ceremony by Swara Bhasker, Bollywood actress.