Noted Konkani author Mahabaleshwar Sail has been honored with the 2016 Saraswati Samman for his novel ‘Hawthan’. The 74-year-old Sail’s novel Hawthan was published in 2009 and was shortlisted from 22 books written in various languages. 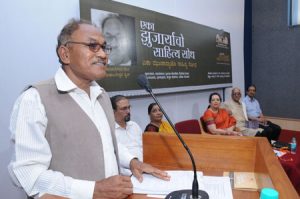 Goa based Mahabaleshwar Sail is a Konkani author who hails from Majoli of Karwar District of Karnataka State.

The Saraswati Samman is an annual award for outstanding prose or poetry literary works in any 22 Indian language listed in Schedule VIII of the Constitution of India.