The Chief Minister of Jharkhand Raghubar Das presented the state’s annual budget for 2017-18 on January 23, 2017 under the theme of “Garib Kalyan Varsh”. The main focus of the budget is on agriculture, education and skill development, rural development and eliminating poverty. 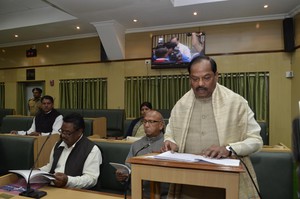 Highlights of the Budget

vii.Major share of the budget has been allocated to the education sector with Rs. 10,000 crore.

viii.In agriculture sector the state government has increased the allocation by 12 per cent to Rs 5,375.22 crore which stood at Rs 4,845.72 crore in the previous fiscal.

x.The women welfare allocation has been increased by 30 percent while in skill development the total allocation has allotted to Rs. 704 crore from the previous Rs 145 crore.

xii.The budget also laid emphasis on development of the scheduled tribes (ST) and scheduled caste (SC) and has allocated Rs 22,259 crore for special schemes related to their uplift.

xv.Besides, Rs 13,414.57 crore is expected from central aid while the states share from central share’s taxes is estimated to be worth Rs 21,034.19 crore.

xvi.The state government hopes to earn Rs 10,000 crore from public loans while advance loan collection is estimated to be worth Rs 66 crore