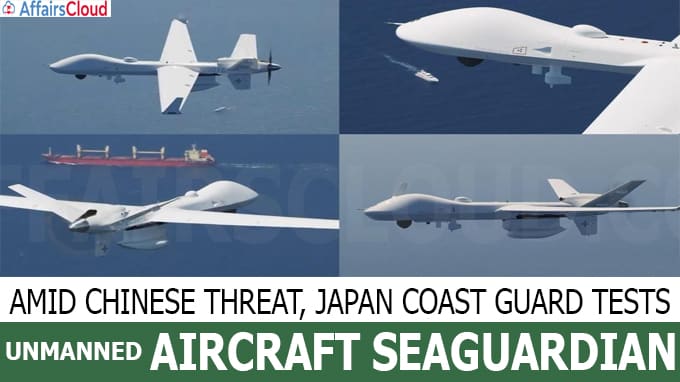 On 15th October, 2020, Japan’s Coast Guard started testing “SeaGuardian” – a Maritime Surveillance Drone in the coast of Sariku in Northeastern Japan, along the coasts of Sea of Japan.

The drone is being tested amidst rising tensions between China & Japan in the East China Sea.

i.It is being tested to check the capabilities of the drone in carrying out operations like search and rescue operations, and maritime surveillance.

ii.The drone has been developed by United States (US) based defence firm General Atomics Aeronautical Systems.

iii.The aircraft will be based at Maritime Self-Defense Force’s base in Aomori Prefecture, North Japan.

iv.The drone can fly nonstop for 24 hours, and is equipped with radars and hi-definition cameras.

v.The Drone is 12-meter long and has a wingspan of 24 meters, it is capable of covering Japan’s exclusive economic zone in a single flight.

vi.The UAV (Unmanned Aerial Vehicle) will engage in pre-programmed flights or will be remotely piloted from ground control station.

i.On September 16, 2020 Yoshihide Suga was formally elected as Japan’s New Prime Minister. He will succeed Shinzo Abe, who was Japan’s Longest serving Prime Minister and stepped down due to health problems.