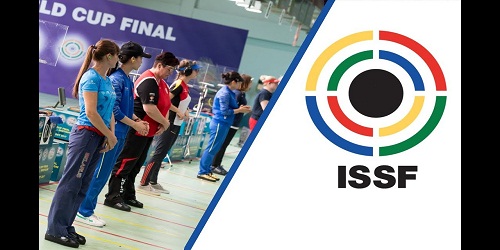 i. Nearly 876 athletes participated in the competition. They represented 70 National Olympic Committees.

ii. The total medals tally was topped by China with a total of seven medals: four golds, two silvers and one bronze.

iii. Russia is in 2nd place with three gold and two silver medals. The United States of America is in 3rd position with two golds and one bronze medals.

i. Shahzar Rizvi won India’s first medal at the ISSF World Cup Stage 2. He won a silver medal in the 10m air pistol event. He scored 239.8.

ii. Russia’s Artem Chernousov won the gold medal with a final score of 240. Bronze medal was won by Bulgaria’s Samuil Donkov whose total score was 217.1.

ii. They had earlier shot a qualification world record in the event, by shooting a combined 778.

i. Sheeraz Sheikh shot 49 out of 50 and was the best-placed Indian shooter at 11th position with three more qualification rounds remaining in the men’s skeet event.

ii. America’s Kimberly Rhode won the women’s skeet gold. She won it with a world record by shooting 58 out of 60 targets in the final.