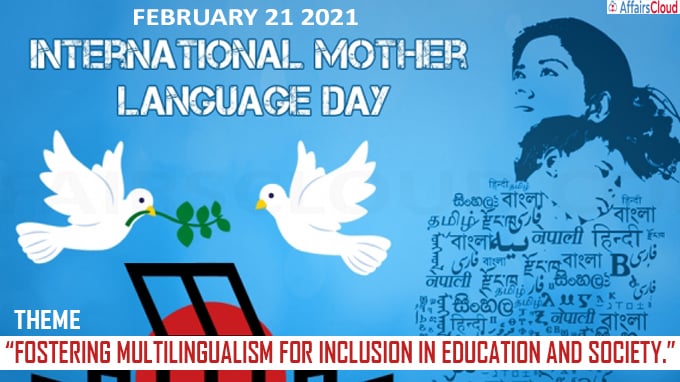 The United Nations(UN)’s International Mother Language Day is annually observed across the globe on 21st February to promote linguistic and cultural diversity and multilingualism.

The 2021 marks the 22nd edition of the International Mother Language Day.

The theme of the 2021 International Mother Language Day is “Fostering multilingualism for inclusion in education and society”.

i.The UNGA adopted the resolution A/RES/61/266 on 16th May 2007 which called upon the member states to promote the preservation and protection of all languages used by the people across the globe.

ii.The resolution also proclaimed the year 2008 as the International Year of languages to promote the unity in diversity and international understanding through multilingualism and multiculturalism.

The efforts of the 2021 international mother language day also contributes to the United Nations International Decade of Indigenous Languages (2022 to 2032).

Importance of protecting the Linguistic Diversity:

i.The language has a strategic importance for people and the planet and due to globalization the languages are under threat of disappearance.

ii.The disappearance of a language also affects the rich cultural diversity of the world.

It is estimated that for every 2 weeks a language disappears along with its entire culture and intellectual heritage.

iii.Out of the 6000 languages spoken across the globe around 43% are endangered.

iv.Only a few hundred languages have been recognised and given a place in education and public domain and less than 100 languages are used in the digital world.

i.As a part of the International mother language day 2021, UNESCO has organised a virtual event, a webinar on the theme of the day.

ii.The webinar was held in English, French and Spanish as well as in International Sign Language.

i.The Union Ministry of Education has been celebrating the International Mother Language day as Matribhasha Diwas since 2015.

ii.As a part of the celebration, a four-day virtual event has been organised by the Ministry of Education, Ministry of Culture and Indira Gandhi National Centre for the Arts(IGNCA).

iii.On the inaugural day of the webinar, Vice President M Venkaiah Naidu addressed the webinar on fostering multilingualism for inclusion in Education and society.