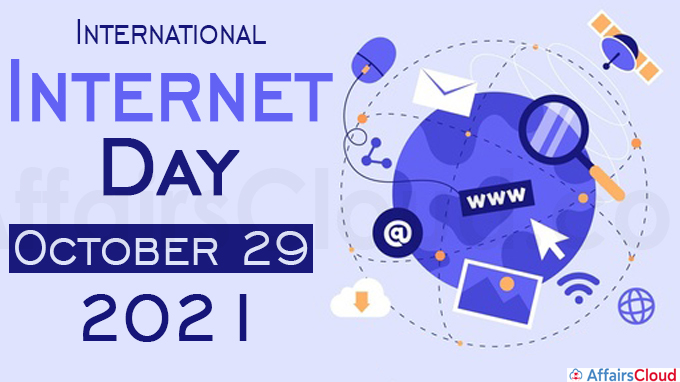 International Internet Day is annually observed across the globe on October 29th to celebrate the anniversary of the first-ever transmission of an electronic message from one computer to another over ARPANET (Advanced Research Projects Agency Network).

The day also commemorates the progress in the history of telecommunications and technology.

i.The First ever International Internet Day was celebrated on 29th October 2005 to highlight the importance of the internet.

ii.The day is promoted by the Association of Internet Users(AIU).

iii.The 29th October was chosen to commemorate the anniversary of the transmission of the first ever electronic message.

i.The first working prototype of the Internet was made in the late 1960s with the creation of ARPANET, established by the Advanced Research Projects Agency (ARPA) of the United States Department of Defense.

i.A team of students led by Leonard Kleinrock professor of computer science at the UCLA Samueli School of Engineering sent the first electronic message from one node in the University of California, Los Angeles (UCLA) to another node at  Stanford Research Institute on 29th October 1969.

iii.The first message transmitted over the network(ARPANET) was the word ‘LO’ and later the programmers sent in the word ‘LOGIN’.

i.According to the Speedtest 2021 global index, the mobile download speed has increased by 59.5% over the last year globally and the same for fixed broadband increased by 31.9%.

The PM WANI app is under testing with the Centre for Development of Telematics(CDoT).

The Union Cabinet headed by Prime Minister Narendra Modi approved the proposal of Department of Telecom (DoT) to proliferate Broadband through Public Wi-Fi networks under the framework of the Prime Minister’s Wi-Fi Access Network Interface (PM-WANI) on 9th December 2020.

RailTel is a registered Public Data Office Aggregator(PDOA) under the PM-WANI project and has developed and deployed PM-WANI solutions across its Wi-Fi Network at 6063 railway stations.