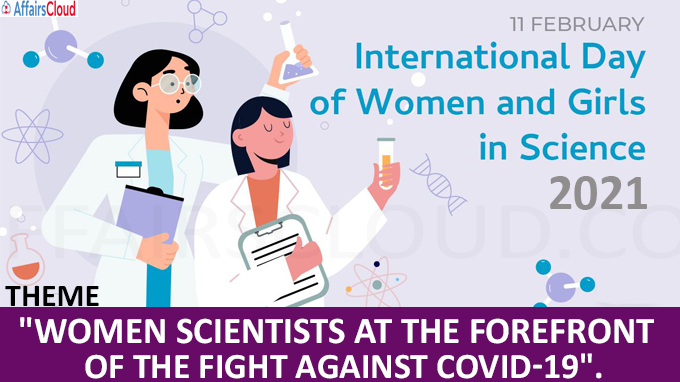 The United Nations(UN)’s International Day of Women and Girls in Science is annually observed across the world on 11th February to recognize the critical role women and girls play in science and technology communities.

The theme of 2021 International Day of Women and Girls in Science is “Women Scientists at the forefront of the fight against COVID-19”.

i.The United Nations General Assembly (UNGA) adopted the resolution A/RES/70/212 on 22 December 2015 and proclaimed the 11th February of every year as the International Day of Women and Girls in Science.

ii.The first International Day of Women and Girls in Science was observed on 11th February 2016.

i.The 6th International Day Women and Girls in Science Assembly will be organised as a virtual event at the UN headquarters in New York, United States on 11th February 2021.

ii.The theme of the Assembly is “Beyond the Borders: Equality in Science for Society” with a focus on the value of social aspects and cultural dimensions in Science, Technology and Innovations to enhance the sustainable development programmes.

iii.The global event, roundtable with experts from across the globe who are in the fields related to the pandemic, under the theme “Women Scientists at the forefront of the fight against COVID-19” was organised as a virtual event from Paris, France.

As a part of the campaign, citizens can congratulate the STEM Stars form their states or districts through personalized card on social media.  Around 700 such STEM stars were featured in MyGov.

Aim:
The campaign aims to honour the young girls across India who have excelled in the subject of Mathematics and Science and encourage the young girls who aspire to excel in STEM.

Participation of Women in STEM:

i.According to the data of UNESCO, around 30% of all the female students choose the STEM related field in higher education.

ii.The enrolment of female students across the globe is lower in ICT which is around 3%, natural science, mathematics and statistics 5% and engineering, manufacturing and construction is 8%.

iii.Currently, only 30% researchers across the globe are women.

iv.According to the “Gender Bias Without Borders” study by the Geena Davis Institute, only 12% of the onscreen characters with identifiable STEM jobs were women.