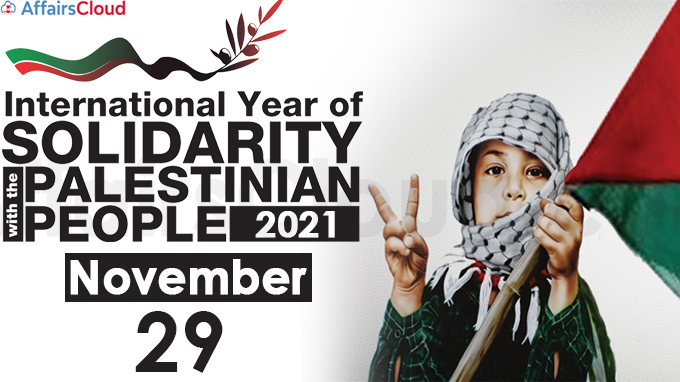 The United Nations (UN)’s International Day of Solidarity with the Palestinian People is annually observed across the globe on 29th November to mark the day on which the resolution for partitioning Palestine into Arab State and a Jewish State was adopted.

i.The United Nations General Assembly(UNGA) adopted the resolution A/RES/32/40 and proclaimed the 29th November as the International Day of Solidarity with the Palestinian People.

ii.The resolution also requested the Secretary-general to establish a Special unit on Palestinian People which would organise the annual observance with the consultation with the Committee on the Exercise of the Inalienable Rights of the Palestinian people(CEIRPP).

November 29 was chosen to mark its meaning and significance to the Palestinian people.

On 29th November 1947, UNGA adopted the resolution known as Partition Resolution, which provided for the establishment in Palestine of a “Jewish State” and an “Arab State”, with Jerusalem as a corpus separatum under a special international regime.

i.The 2021 United Nations International Media Seminar on Peace in the Middle East is annually organised by the United Nations Department of Global Communications within the framework of its media program on the question of Palestine.

ii.The seminar was virtually held from 16th and 17th November 2021.

To educate the public on the question of Palestine and support a peaceful settlement of the Israeli-Palestinian conflict.

About United Nations Relief and Works Agency for Palestine Refugees in the Near East (UNRWA):