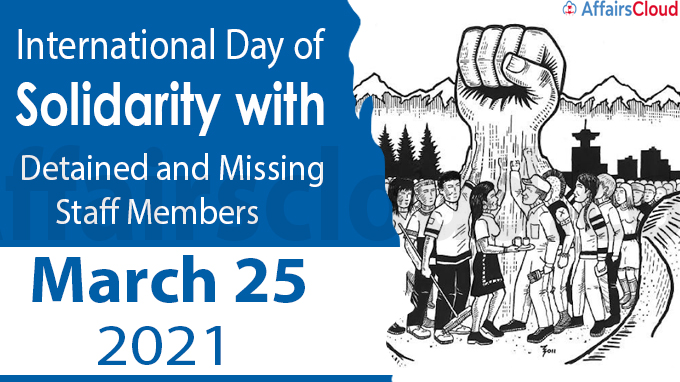 The United Nations(UN)’s International Day of Solidarity with Detained and Missing Staff Members is annually observed across the globe on 25th March. The day recognises the dangers encountered by the UN staff members as they carry out their work for the United Nations.

Purpose of the day:

To mobilise action, demand justice and strengthen the resolve to protect UN staff, peacekeepers and the members of the non-governmental community and the press associated with the UN.

i.The UN Security Council adopted the resolution S/RES/868(1993), the first resolution on staff security, on 29th September 1993.
ii.The negotiations took place in the 6th (Legal) committee of the UNGA on an international legal convention to protect UN personnel.
iii.Convention on the Safety of United Nations and Associated Personnel, which was adopted by the UN General Assembly on 9 December 1994 was the result of those negotiations.