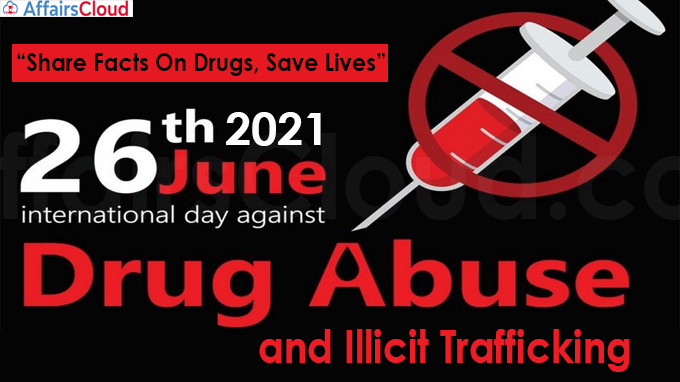 The United Nations (UN)’s International Day Against Drug Abuse and Illicit Trafficking is annually observed across the globe on 26th June to create awareness about the major problem that illicit drugs represent to society.

The theme of the 2021 International Day Against Drug Abuse and Illicit Trafficking is “Share Facts On Drugs, Save Lives”.

The United Nations General Assembly(UNGA) adopted the resolution A/RES/42/112 on 7th December 1987 and proclaimed the 26th June of every year as the International Day against Drug Abuse and Illicit Trafficking.

ii.The World Drug Report provides a global overview on the supply and demand of opiates, cocaine, cannabis, amphetamine-type stimulants and new psychoactive substances (NPS) and their impacts on health.

iii.The World Drug Report 2021 consists of 5 separate booklets which provide an analysis of the global drug markets and paints a comprehensive picture of measurable effects and the impacts of the COVID-19 crisis on the world drug problem.

About United Nations Office on Drugs and Crime (UNODC):