Indian-American physician-author Abraham Verghese, whose work has emphasised empathy in medicine, has been selected for the 2015 National Humanities Medal. President Barack Obama would confer the honour upon Verghese, along with 11 others, on September 21.

Abraham Verghese(born 1955) is a physician-author, Professor for the Theory and Practice of Medicine at Stanford University Medical School and Senior Associate Chair of the Department of Internal Medicine. 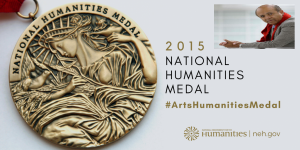 The National Humanities Medal is an American award that annually recognizes several individuals, groups, or institutions for work that has deepened the nation’s understanding of the humanities, broadened our citizens’ engagement with the humanities, or helped preserve and expand Americans’ access to important resources in the humanities.

NEH asks that nominators consult the list of previous winners and consider the National Medal of Arts to recognize contributions in “the creative or performing arts”.