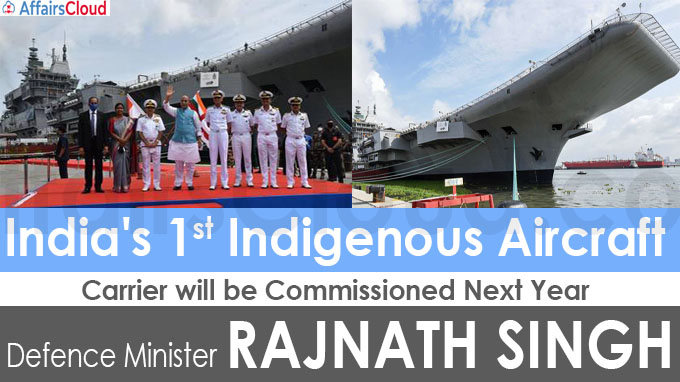 Union Minister for Defence Rajnath Singh has stated that India’s 1st Indigenous Aircraft Carrier (IAC) will be commissioned into Indian Navy’s Eastern Naval Command as ‘INS Vikrant’ by mid-2022. It is being built at Cochin Shipyard Limited (CSL).

ii.It will be compatible with the MiG-29K and Light Combat Aircraft (LCA) Navy Aircraft and has a landing strip equipped with STOBAR (Short Take Off But Arrested delivery) mechanism.

iii.The Sea Trials for IAC will be conducted in July 2021. It had already successfully completed the ‘Basin Trials’ in November 2020.

Note – IAC has been named as INS Vikrant, after India’s aircraft carrier which was decommissioned in 1997.

Rajnath Singh visited the Karwar Naval Base (also known as INS Kadamba) in Karnataka which is being developed under Project Seabird.  During the visit, he stated that  India should aim to be among one of the top 3 naval powers in the world in the next 10-12 years period.

i.Indian Government is taking several steps to realize the aim of becoming a Naval Powerhouse. Some of them are

Indian Army issued a tender – Request For Information (RFI) for the procurement of 1,750 Futuristic Infantry Combat Vehicles (FICVs) to replace the Russian-origin BMP-2.

i.An RFI has also been issued for the procurement of 1770 Future Ready Combat Vehicles (FRCV) for procurement of the next generation Main Battle Tank with planned induction from 2030.