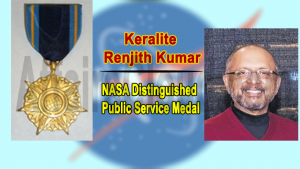 On 8th June 2020, Renjith Kumar, Engineer from Kerala and Indian Entrepreneur based in Virginia is honoured with NASA’s highest form of recognition for a non-governmental individual “NASA Distinguished Public Service Medal” for his service to NASA through executive leadership, engineering contribution, technical excellence and customer satisfaction.

The “NASA Distinguished Public Service Medal” is given for the non-governmental individuals or individuals who are not a part of government employees during the performed service who provide a level of excellence supporting or impacting the success of NASA’s missions and contribution in NASA’s advancement of United States interests.

Note: RK Chetty Pandipati was the First Indian to win this award in 2002.

ii.He did his MS and doctorate in Aerospace engineering from the Virginia Institute of Technology, United States.

i.He worked in association with NASA for more than 30 years and contributed in redesigning the International Space Stations(ISS).

ii.He is CEO Emeritus of the Virginia based Analytical Mechanics Associates(AMA).

During his term as AMA’s CEO, the company was involved in the Curiosity, Mars mission since the inception and worked in the Rover’s Entry, Descent and Landing (EDL).

About AMA:
Chairman of the Board– Barry Meredith
Headquarters– Hampton, Virginia