An airway is defined as the corridor that connects one specified location to another at a specified altitude, along which an aircraft that meets the requirements of the airway may be flown. 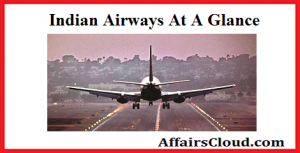