Indian actor Rekha will be honoured by the upcoming Dubai International Film Festival with a Lifetime Achievement Award. The festival runs from December 7 to 14, and is now arguably the leading cinematic event in the region of both Doha and Abu Dhabi.

The Dubai International Film Festival (DIFF) is the leading film festival in the region. Since its inception in 2004, the festival has served as an influential platform for Arab filmmakers and talent at an international level, by spearheading the cinema movement in the region.

The DIFF is held under the patronage of His Highness Sheikh Mohammed Bin Rashid Al Maktoum, UAE Vice President & Prime Minister and Ruler of Dubai. It is a not-for-profit cultural event, presented and organised by Dubai Entertainment & Media Organization.

Rekha Ganesan better known by her stage name Rekha, is an Indian film  Noted for her versatility and acknowledged as one of the finest actresses in Hindi cinema. 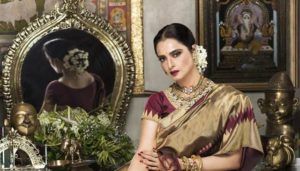