As a significant marking in Public Health Protection, India has been declared as YAWS – FREE country by the World Health Organization (WHO). It is stated that India is the First ever country to become free from YAWS and declared it free from Maternal and Neonatal Tetanus(MNTE). 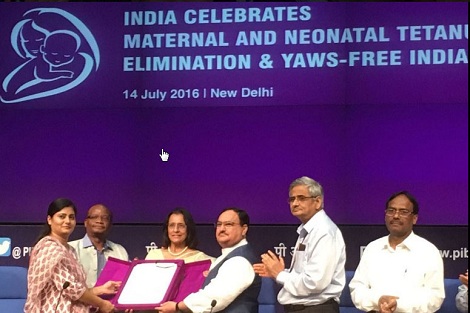 Yaws is a infection of the skin, bones and joints caused by the spirochete bacterium Treponema pallidum pertenue. The disease starts with a round, hard swelling of the skin of about 2 to 5 centimeter in diameter. The center may break open and form an an ulcer. This initial skin wound typically heals after three to six months.

After weeks to years, joints and bones may become painful, fatigue may develop, and new skin wounds may appear again. The skin in the palms of the hands and the soles of the feet may become thick and crack open. The bones around nose may become misshapen. After five years or more large areas of skin death with subsequent scarring may occur.

It is commonly seen that Yaws is spread by direct contact with the fluid from a lesion of an infected person and it is most common among children, who spread it by playing together. The contact is usually of a non-sexual nature.