As per a study conducted by Lancet Commission on Pollution and Health, released in Lancet medical journal, India has topped the list of countries with highest pollution-related deaths in year 2015. In this context, pollution-related death refers to death caused by diseases linked to air, water and other forms of pollution.

About Study conducted by Lancet Commission on Pollution and Health:

More than 40 international health and environmental authors were involved in this study which is a part of a two-year project.

Highlights of Study conducted by Lancet Commission on Pollution and Health:

In 2015, pollution-related death toll in India stood at 2.51 million, which is 28 per cent of an estimated 9 million pollution-linked deaths worldwide in the same year. 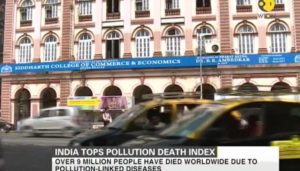