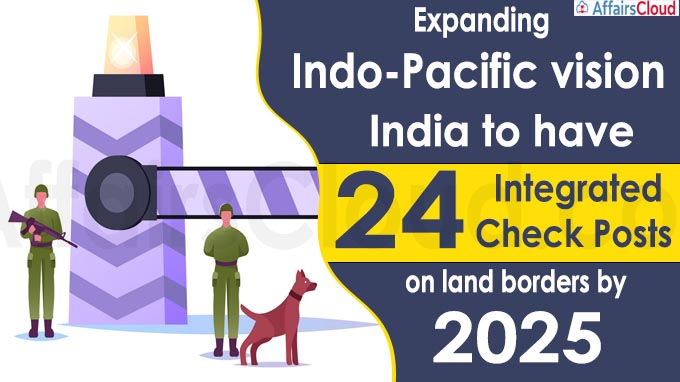 During a seminar organized by Centre for Social & Economic Progress (CSEP), Aditya Mishra, Chairman of LPAI (Land Ports Authority of India), a statutory body under the Ministry of Home Affairs stated that India will have 24 Integrated Check Posts (ICPs) on land borders by 2025. It will enable better integration of India with the South East Asian region and other regions beyond them.

i.In addition to the ICPs, India is taking steps to ensure that all 90 transit points along the 15,000 km border are covered under standard infrastructure to facilitate all types of trade, transit and travel.

ii.Government is allocating funds for the establishment of ICPs. In January 2021, it released INR 90 crores for ICP at Sabroom, Tripura, which will connect Chittagong port in Bangladesh with the rest of the Northeast.

iii.Increased importance on ICPs is driven by various factors like rising trade between India and neighbouring countries, and the demand from smaller South Asian countries to increase connectivity infrastructure. India’s international obligations also play a major role to strengthen infrastructure at the border.

India inaugurated its 1st ICP in 2012 at Attari international land border (India-Pakistan border). It was done as part of the efforts to modernise border management infrastructure to facilitate trade and passenger movement.