The Union Government signed an important Raptor MoU for the Conservation of Migratory Birds of Prey in Africa and Eurasia. 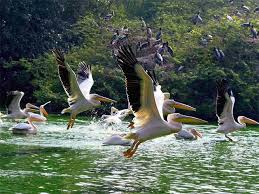