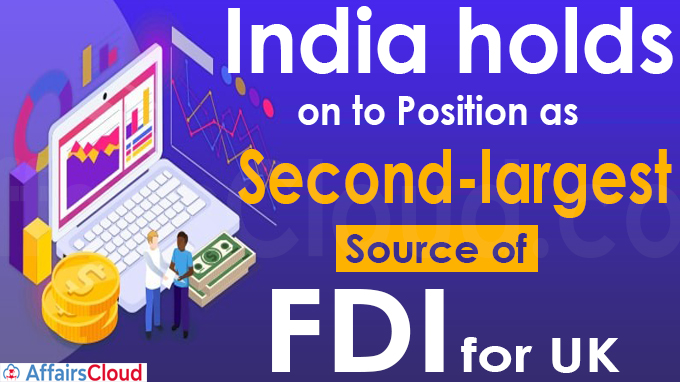 According to the Inward Investment Statistics for 2020-21 released by the Department for International Trade (DIT), the Government of the United Kingdom (UK) – India retained its position as the 2nd largest source of Foreign Direct Investment (FDI) for the UK in 2020. The United States (US) took the top spot.

i.Challenges like COVID-19 & post-Brexit have caused the decline in the number of projects and jobs created in the UK compared to 2019.

ii.Sectors which contributed most to job creation are Food and drink, creative and media, environment, infrastructure and transportation, as well as biotechnology and pharmaceuticals.

iii.The United Nations Conference on Trade and Development (UNCTAD) in its recent analysis stated that UK’s FDI inflows increased to USD 2.2 trillion in 2020 (from USD 2.1 trillion in 2019), which is the 2nd highest in the world after the US.