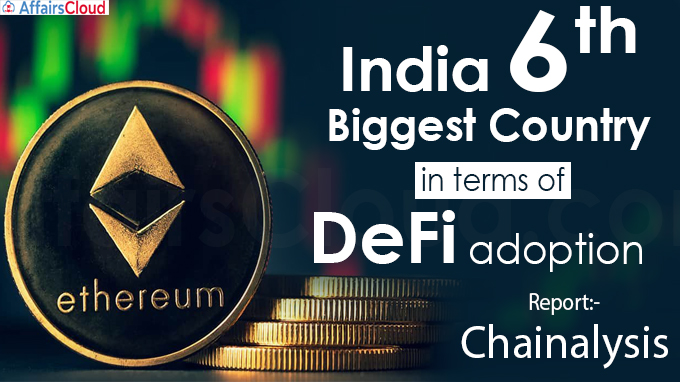 The 1st Edition of the Global DeFi (Decentralised Finance) Adoption Index was released by Chainalysis.

i.It is a blockchain-based form of finance that does not rely on central financial intermediaries such as brokerages, exchanges, or banks to offer traditional financial instruments, and instead utilizes smart contracts on blockchains, the most common being Ethereum.

i.DeFi adoption is strongest in high-income countries or countries that already had substantial cryptocurrency usage, especially amongst traders and institutional investors.

ii.Large transactions: The data shows that large transactions make up a much bigger share of DeFi activity, suggesting that DeFi is mostly popular among bigger investors.

iii.Countries that have historically accounted for the most professional and institutional-sized cryptocurrency transactions are also driving the most DeFi activity.

In August 2021, the 2nd Edition of Global Crypto Adoption Index 2021 was released by Chainalysis, India ranked 2nd out of 154 counties with a score of 0.37. Vietnam topped the rankings.