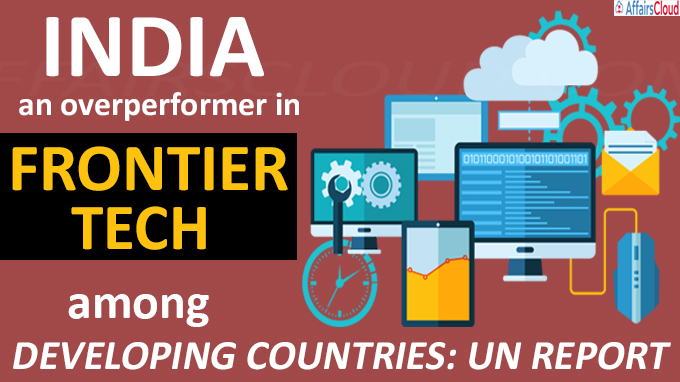 In accordance with the new country-readiness index released by the United Nations Conference on Trade and Development (UNCTAD) in its ‘Technology and Innovation Report 2021’, India is the biggest over performer in frontier technologies than it’s per capita gross domestic products (GDP) among 158 countries.

What are frontier technologies?

i.Several developing countries showed stronger capabilities to use and adapt frontier technologies above their GDPs.

ii.China was at position 25. Both India and China performed well in research and development.

iii.The Philippines has a high ranking for industry because of high levels of foreign direct investment in high-technology manufacturing, especially electronics.

iv.The United States (US), Switzerland and the United Kingdom (UK) were best prepared for frontier technologies.

v.Most of the best-prepared countries are from Europe, except the Republic of Korea, Singapore and the United States (US).

vii.To benefit from frontier technologies, countries need to promote their use, adoption and adaptation.

Though several countries showed stronger capabilities in frontier technology but there still many who are lagging behind due to the following challenges:

ii.On 8th December 2020, “Invest India” won the 2020 UNCTAD Investment Promotion Award by the UNCTAD. Invest India is a non-profit venture under the Department of Promotion of Industry and Internal Trade, Ministry of Commerce and Industry.