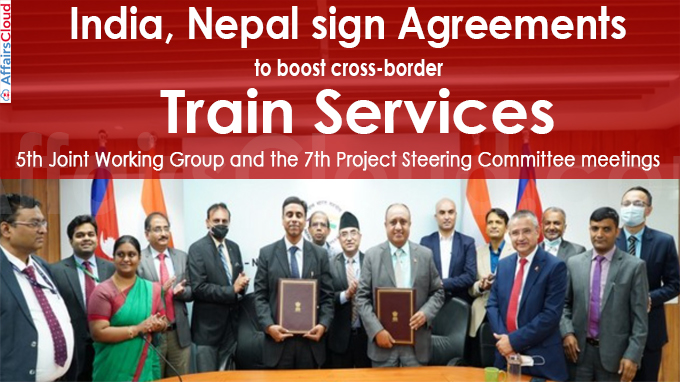 India and Nepal have signed two agreements worth USD 3.15 billion, aimed at boosting cross-border train services and to improve regional connectivity and trade.

ii.To serve as a guiding document for the early start of services in upcoming cross-border railway links.

i.The two countries also signed a memorandum of understanding (MoU) for a Final Location Survey (FLS) for a proposed broad gauge railway line between Raxaul and Kathmandu to boost connectivity between the two countries.

ii.The two countries reviewed progress on the Raxaul-Kathmandu railway link and discussed several phase-II railway link projects and agreed to enhance technical cooperation in the railways sector, including in the areas of capacity-building, logistics support and training of Nepal’s railway personnel.

iv.The technical preparedness of a 34-km section of the railway line from Jaynagar in India to Kurtha in Nepal for starting passenger train services was also reviewed.