Verisk Maplecroft has released a list of countries for the business opportunities based on the civil unrest and peace prevalence in the countries called the “Civil Unrest Index“. Pathetidally India ranked 4th in this list preceded by Syria, Yemen and Libya. 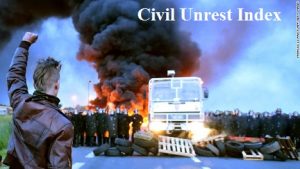 This list determines the ease of business doing in the country. The Top 10 pathetic Rankings are as follows,

The report by Maplecroft denotes that it is striking that India, Brazil, France, Mexico and South Africa have all witnessed substantial disorder in the last year, lack adequate structures to avoid grievances escalating into wholesale protests.