A global research organization, World Resources Institute (WRI) has come out with its latest analyses of the country-wise emissions of climate damaging greenhouse gases.

According to which India is the fourth largest emitter of Carbon but it is far behind the other three top big emitters in terms of per capita emission.

India’s greenhouse gas emission accounts for 6.96% of the world

Developing countries like China, Mexico and Brazil are way ahead of India in terms of their per capita contribution to the overall emissions. 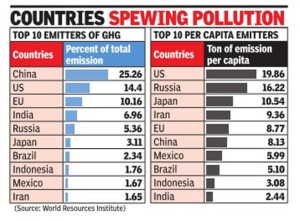 Energy sector is the major source of greenhouse gas emissions. It contributes more than 75 per cent of global emissions.