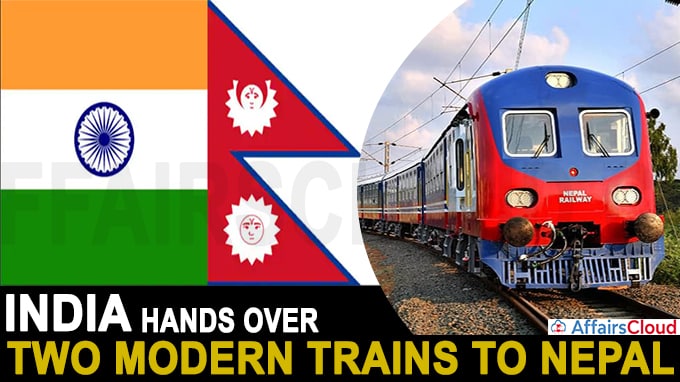 ii.They were procured by Nepal’s Railway Department for a price of 84 Crore 65 Lakhs Nepali Rupees.

iii.Each set will have 5 coaches, and will withstand a capacity of 1, 300 passengers at a time.

i.The train services between Jaynagar and Kurtha will cover a distance of 35-km and will benefit people of both countries.

ii.This line was originally built by British Raj to transport logs from forests at Mahottari, Nepal to India.

iii.India has provided the financial and technical support for the construction of the railway line. The services in the line will start after the Dashain and Tihar festivals.

With the arrival of the two modern trains, the trial service for Nepal’s first Broad-Gauge railway service began from September 18, 2020.

i.Indian Government is building the 69-km Jaynagar-Janakpur-Bardibas railway at a cost of Rs 10 billion.

ii.The Railway Track is being built in three phases. The first phase links Jaynagar and Kurth, the 17 km long second section will link Kurtha and Bhangaha (Nepal) and the 17 km long third phase extends from Bhangaha to Bardibas.

i.On 12th May 2020, TheThiruvananthapuram division of Southern Railways and Kerala Circle of Postal department has initiated a first of its kind to establish tie up with the door delivery and pick up of parcels to help the public during the lockdown.