Canada, India, Singapore and Egypt are interested in buying France’s two Mistral warships after France scrapped a deal to sell the vessels to Russia over the Ukraine crisis. 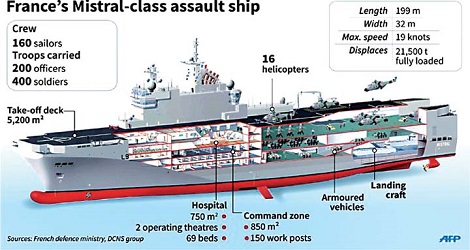 Cost
–        At least 1.1 billion euros (USD 1.2 billion) if the government did not find another buyer.
–        Figure includes the costs of the maintenance required to keep the pair of amphibious helicopter-carriers in operational condition and fees for keeping them docked in the western port of St Nazaire, which together are running at a whopping two million euros a day.

It does not include the costs of removing Russian fittings – including communications equipment that is already on the ships.

The deal to sell the warships to Russia was formally cancelled in early August in response to Ukraine crisis which prompted France to halt delivery late last year. Now, French government needs a buyer who will want two foreign-built warships at short notice and at a price not too far below the Russian one.