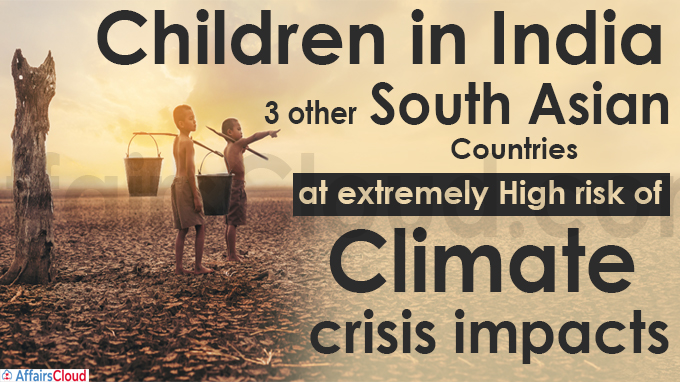 In accordance with the UNICEF (United Nations Children’s Fund) report titled ‘The Climate Crisis Is a Child Rights Crisis: Introducing the Children’s Climate Risk Index’ (CCRI), India is among the 33 extremely high-risk countries where approximately 1 billion children(half the world’s 2.2 billion children population) are most at risk of the impacts of climate change that will affect their health, education, and protection.

Children in Iceland, Luxembourg and New Zealand are at very low risk as per the index.

Two Pillars of the Report:-
The CCRI Report is composed of two pillars which further have many indicators for monitoring and evaluation of child climate vulnerability and exposure to specific hazards (risk).
i.Pillar 1 – Exposure to climate and environmental shocks and stresses and its Indicators/components are

i.It report was launched in collaboration with Fridays for Future on the third anniversary of the youth-led global climate strike movement i.e. on August 19, 2021.

ii.As per the report, more than 600 million Indians will face ‘acute water shortages’, simultaneously, floods will also increase in India’s urban areas once the global temperature increase rises above 2° Celsius.

In accordance with the official data published by WHO (World Health Organization) and UNICEF namely ‘WHO/UNICEF estimates of national immunization coverage (WUENIC)’ on comprehensive worldwide childhood immunization figures’ 23 million children missed out on basic vaccines through routine immunization services in 2020.