Welcome to Online Reasoning Section with explanation in AffairsCloud.com. Here we are creating Best question samples for IBPS PO 2017. We have included Some questions that are repeatedly asked in bank exams !!!

Q(1-5). Study the following data and answer the questions
There are ten people Anil, Ajay, Amit, Raju, Ramu, Ravi, Rita, Roja, Sita & Gita who were born in the same year. In the year 2017 they celebrated their birthdays by purchasing ten different items AC, TV, Car, Sopha, Mobile, Table, Laptop, Mixer, Grinder & Fridge on their birth date. Their Birthdays are in the months of January, February, March, April, May. In each month only two persons are having birthdays.
One who bought AC was born on 8 th of a particular month. Sita was born on Last day of a month. One who bought laptop was born on 31 st of the month. Roja was youngest of all and born on 26 th of the month. More than two people celebrated birthday before birth date of Rita. Anil & Ramu are celebrating are having same birth dates 12 th but in different months. No of people celebrating birthday between Roja & Gita is four. Ravi, Ramu, Raju purchased AC, TV, Fridge for their birthdays respectively. Ajay bought table his birth date is 30 th and the month of his birthday has only 30 days. No of people celebrating birthday between Ramu & Gita is two. Sopha & Table are bought in same month. Person whose birthday is on 17 th bought Mobile. Ramu & Raju born in the month of January. Anil is younger than Gita and he does not buy Mixer. Rita birthday is on 31 st. Sita & Ravi were born in same month. Amit bought Mixer and born on 15 th of a month. Car was bought in February. 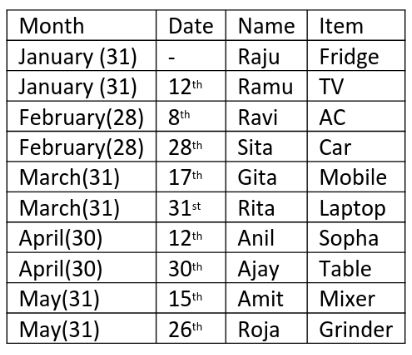 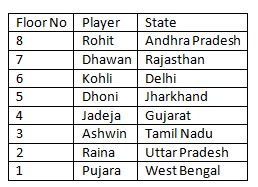