On September 2, 2019, The Indian Air Force (IAF) has received 8 US-made ‘Apache AH-64E’ fighter helicopters from US (United States)aerospace major Boeing at Airforce Station, Pathankot, Punjab. Air Chief Marshal B. S. Dhanoa was the chief guest of the ceremony held at the Pathankot Station. 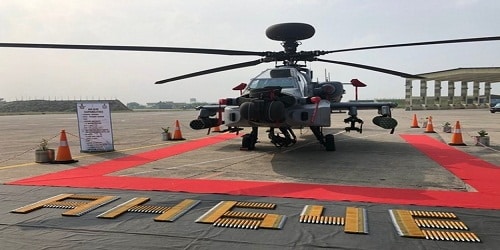 Key points:
Order: In September 2015, IAF had signed a contract with US Government and Boeing for purchasing 22 AH-64E  Apache helicopters. Boeing delivered the first 4 out of 22 helicopters on 27 July 2019. The first batch was delivered to the Indian Air Force at Hindon Airbase in Ghaziabad, Uttar Pradesh(UP). The remaining of 22 will get to India in a phased manner.
Apache helicopters:
i. About: It is the most modern multi-role combat helicopter in the world and the US Army also uses it. These helicopters are equipped with laser sensors and night vision cameras, meaning they can carry out attacks even at night.
ii. Manufacturer: Boeing, the world’s largest aerospace company has developed and manufactured the Apache helicopters. It has delivered more than 2,200 Apaches to customers around the world and India is 16th nation to select it for its military.
iii. Feature: It is capable of simultaneous attacks on 128 targets. The helicopter, equipped with 16 anti-tank missiles, can fire from 4.6 km away. Its flight range is 500 km, which flies at a maximum speed of 279 km per hour.
iv. It also is equipped with a 330 mm chain gun that can fire 1,200 rounds, air to ground hellfire missiles, 70 MM Hydra rockets and air to air stinger missiles. These will slowly replace the ageing Russian made Mi35 helicopters.
v. Importance: These new choppers have increased manifold capability to attack accurately & it will provide a significant edge to Indian armed forces in future joint operations in support of land forces.
About IAF:
Founded: 8 October 1932
Headquarters: New Delhi
About Boeing:
CEO: Dennis Muilenburg
Headquarters: Chicago, US.