In the Hockey India second annual awards for the year 2015 Event various awards have been given away in the function held at Bengaluru. 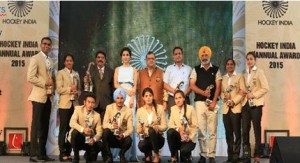 DhruvBatra Player of the Year award:

India goalkeeper PR Sreejesh and Deepika has been honoured with the DhruvBatra Player of the Year award for men and women, respectively, at the Hockey India second annual awards at Bengaluru. Both Sreejesh and Deepika bagged Rs. 25 lakh and a trophy each for their achievement

The Late Captain ShankarLaxman was posthumously picked for the Lifetime Achievement Award, which carried a purse of Rs. 30 lakh and was accepted by his son, Manohar Singh Shekhawat. Capt. Laxman, a goalkeeper, was part of the Olympic medal-winning teams of 1956 (Melbourne, gold), 1960 (Rome, silver), and 1964 (Tokyo, gold).

Upcoming Players of the Year:

The Award winners under the following category have been given Cash Prize of Rs.5, 00,000 and Trophy.