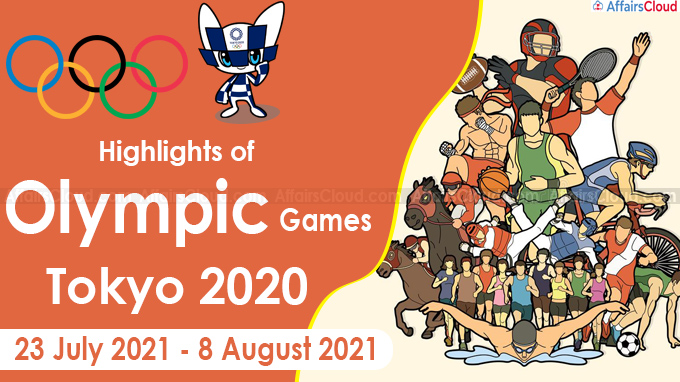 The 32nd Edition of Olympic Games is set to take place in Tokyo, Japan from 23rd July, 2021 – 8th August, 2021.  As many as 206 National Olympic Committee (NOC) Countries are participating in the games.

ii.The 2020 Games mark the 2nd time that Japan is hosting the Summer Olympic Games, the 1st one also took place in Tokyo in 1964. It is the 1st City in Asia to host the Summer Games Twice (Including Winter Games, it is the 4th Olympic Games in Japan).

iv.The Olympics are organized by the International Olympic Committee (IOC).

India is sending a 228-member Contingent to the Tokyo Olympics, which includes 119 athletes (67 male & 52 female). It will be India’s largest ever contingent of athletes at the Olympics.

i.Deepak Kabra has become the 1st Indian to be selected for judging the Gymnastics competition of the Olympic Games. He will officiate the men’s artistic gymnasts.

The official cheer song ‘Hindustani Way’ for the Indian Contingent.  It is performed by singer Ananya Birla and composed by veteran Indian music composer AR Rahman.

iii.The United Nations Postal Administration (UNPA) & International Olympics Committee (IOC) have created a series of 6 stamp sheets to highlight the contribution of sports to peace around the world.

The Paralympic Games, featuring athletes with an impairment, take place shortly after every Olympic Games in the same host city.

The Olympic Motto was amended to ‘faster, higher, stronger – together’ and ‘Citius, Altius, Fortius – Communis’ in Latin during the IOC’s session in Tokyo.