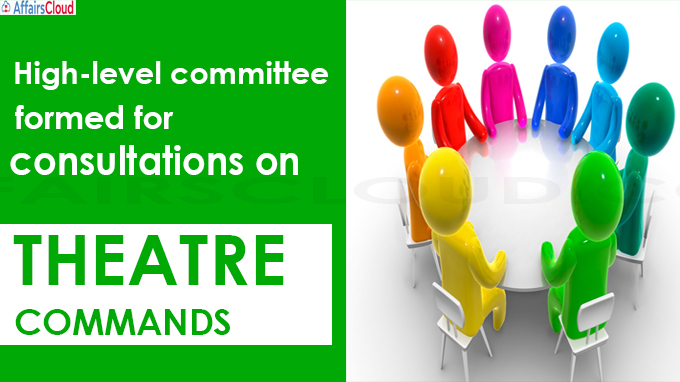 A high-level committee consisting of representatives from the 3 services (Army, Air Force and Navy) and the Ministries concerned such as Department of Defence, Ministry of Home Affairs, and National Security Council Secretariat has been formed for the consultations on the creation of integrated triservice theatre commands.

i.An integrated theatre command is a unified command of the three Services, under a single commander, for geographical theatres (areas) that are of strategic and security concern.

ii.It will integrate the capabilities and potential of all the 3 Services during war and peace.

iii.Those integrated theatre commanders will not be answerable to individual Services and the integration of the 3 forces will avoid duplication of resources.

iv.Background: In October 2020, Chief of Defence Staff (CDS) General Bipin Rawat had constituted teams headed by the Vice Chiefs of the three Services to study and submit recommendations on the formation of various integrated commands.

Note – The Shekatkar committee has recommended the creation of 3 integrated theatre commands — northern for the China border, western for the Pakistan border, and southern for the maritime role.

CDS Bipin Rawat stated about the proposed integration of commands such as,

About the formation of CDS and DMA:

ii.CDS: It is a 4-star single-point military adviser to the government’s defence ministry (Suggested by the Kargil Review Committee in 1999 headed by K. Subrahmanyam). The CDS will oversee and coordinate the working of the three Services.

iii.Department of Military Affairs (DMA): It was created within the Ministry of Defence(MoD) to work pertaining to military matters and it was headed by CDS.

A group headed by Navy Vice Chief Vice Admiral G Ashok Kumar, plans to complete India’s 1st Maritime Theatre Command (MTC) within 2021. It will be the first new “Geographical” Theatre command to be created as part of military restructuring plans.

About Current Commands of Armed forces:

i.The Indian armed forces currently have 17 commands. 7 commands each of the Army and the Air Force, 3 commands of the Navy.

iii.SFC (Strategic Forces Command) is the second joint command created in 2003 to look after the delivery and operational control of the country’s nuclear assets (it is not an integrated theatre command but an integrated functional command).