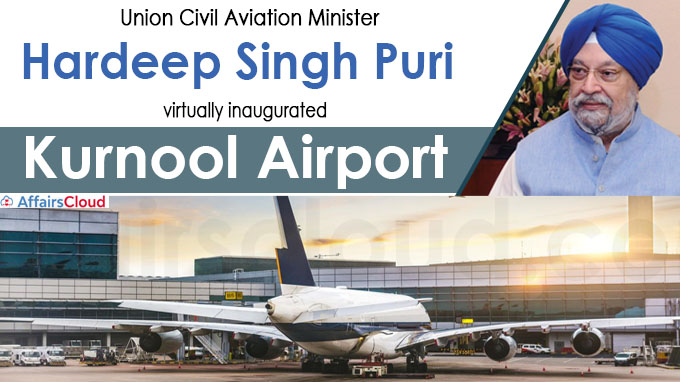 i.The airport is classified as ‘3C’ and it is capable of handling turboprop aircraft like ATR-72 and Bombardier Q-400.

iii.The airport has a 2000 meter runway and 4 aprons to park the aircrafts.

i.YS Jagan Mohan Reddy has named the Kurnool Airport after Uyyalavada Narasimha Reddy, the first ever freedom fighter of the region.

ii.He also inaugurated the statue of the former CM YS Rajasekhar Reddy in front of the Passenger terminal of the airport.

iii.He also released a special postage stamp on the occasion of the inauguration of Kurnool Airport.

Bareilly Airport became the 8th Airport of Uttar Pradesh(UP). The Trishul Military Airbase has been upgraded as the Bareilly Airport for commercial flight operations under the Regional Connectivity Scheme – Ude Desh Ka Aam Nagrik (RCS-UDAN) of the Government of India.