According to the recently released report,” Composite Water Management Index 2019” (CWMI 2.0) for the year 2017-2018 by Government’s think tank NITI Aayog(National Institution for Transforming India) in association with Ministry of Jal Shakti and Ministry of Rural Development , Gujarat has again performed better in water management practices to get top spot with a score of 75.
The Index was launched by Shri Gajendra Singh Shekhawat, Minister of Jal Shakti, and Dr. Rajiv Kumar, Vice Chairman, NITI Aayog. 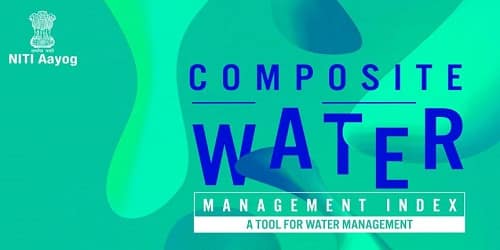 Key points:
i. Himalayan States: Gujarat was followed by Andhra Pradesh(74), Madhya Pradesh(70), Goa(60) and Karnataka(59) have topped the Index among non-Himalayan states.
ii. Non-Himalayan States: Himachal Pradesh(67) stood first in 2017-18 among the northeastern and Himalayan states followed by  Uttarakhand(49) and Tripura(47).
iii.Themes& Coverage:  In the given index, states have been ranked across 9 themes &it covers 25 states and 2 union territories(Puducherry and Delhi). The Index does not include data from West Bengal, Mizoram, Manipur and Jammu & Kashmir.
The 9 themes include ,

iv. Haryana secured the first position among general states in terms of incremental change (over 2016-17 level), while Uttarakhand topped the category of northeastern and Himalayan states.
v. low-performing category: Uttar Pradesh(39), Bihar(38), and Jharkhand(34) continued to be in the low-performing category in the chart.
vi. 80% of states assessed on the Index over the last 3 years have improved their water management scores, with an average improvement of +5.2 points but 16 out of the 27 states still score less than 50 points on the Index (out of 100).
vii. Mission: The index iterates a strong mission of Prime Minister Modi’s Jal Shakti Abhiyan.
viii. Background: The Composite Water Management Index was 1st launched by NITI Aayog in 2018. The index was launched then as a tool to instill the sense of cooperative and competitive federalism among the states in water resource management.

Composite Water Management Index(CWMI) 2019:
i. The CWMI 2.0 ranked the states and Union Territories(UT) for the reference year 2017-18 as against the base year 2016-17.
ii. It is an important tool to assess and improve the performance by the states and Union Territories in water resource management.
iii. The index not only provides extremely useful information to the states but also to the concerned central departments or Ministries, which will enable them to form and implement effective plans for better management of water resources.