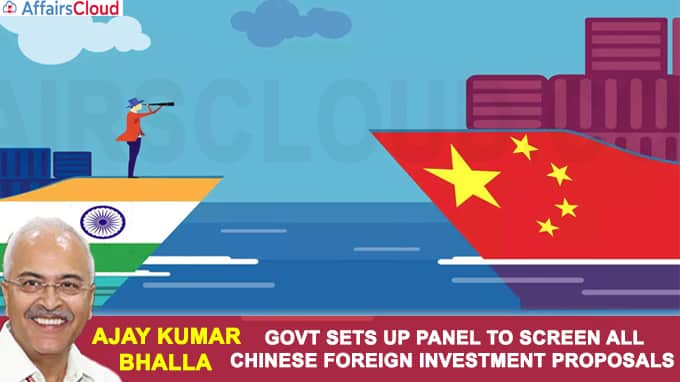 On October 1, 2020 The Government of India has set up a screening panel to examine all Chinese foreign investment proposals. The panel is headed by the home secretary, Ajay Kumar Bhalla and secretary of the Department for Promotion of Industry and Internal Trade (DPIIT) as a member.

Note– The inter-ministerial committee has been set up to examine the proposals received by various ministries that were sent to the Home Ministry for security clearances.

i.After the committee examines the proposals on the perspective of ownership and its implications for security, the proposal may be approved if they are not controversial.

Prior Nod for Critical Sector Investments

ii.An entity of a country that shares land borders with India or where the beneficial owner of an investment into India is situated in or is a citizen of any such country can only invest under the government route

The Government of India under the Ministry of finance, Department of Revenue has set up a three-member committee headed by Secretary (retired)G.K. Pillai for determination of ceiling rates under Remission of Duties and Taxes on Exported Products (RoDTEP) scheme. The two other members are Y G Parande, retired Central Board of Indirect Taxes & Customs member and Gautam Ray, retired chief commissioner of custom and central excise.

About Ministry of Commerce and Industry: