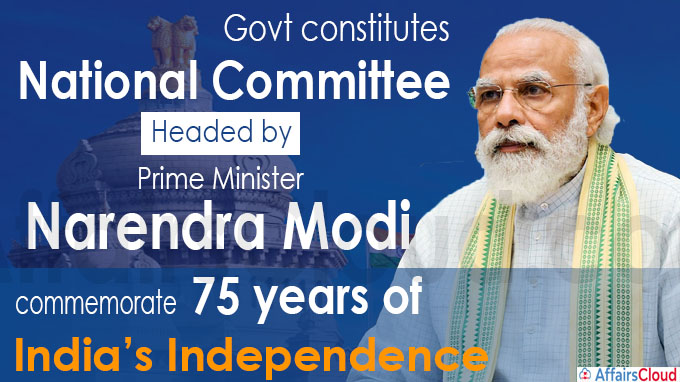 The Government of India constituted a National Committee headed by Prime Minister Narendra Modi to commemorate the 75 years of Independence day which falls on 15th August 2022. The day will be commemorated at national and international level in the form of Azadi Ka Amrit Mahotsav.

Celebration of 75 years of Independence Day:

ii.The day also marks the 91st anniversary of the Mahatma Gandhi’s Salt satyagraha from Sabarmati Ashram in Ahmedabad to Dandi.

iii.The inaugural program will be chaired by PM Modi and the States and Union Territories(UT) will be organising programs in 74 venues across India on the same day.

iv.The Ministry of Culture will be organising a special program on the occasion.

v.PM Modi will also flag off a Padyatra from Sabarmati to Dandi memorial which will culminate on 5th April 2022.

i.The National Implementation Committee under the chairmanship of Home Minister Amit Shah has been constituted.

ii.The committee will guide the policy and programmes to be undertaken by the ministries of the Government of India.

iii.A committee of secretaries has also been constituted for the same.