On June 27, 2019, Government formed a 18-member working group headed by Ramesh Chand, member of NITI (National Institution for Transforming India) Aayog, to revise current series of Wholesale Price Index (WPI) with base year 2011-12 and come up with a new Producer Price Index (PPI). The other members of the panel include 4 officials from National Statistical Office, 2 from Ministry of Finance, 1 from Department of Agriculture, 1 from RBI, 1 from Ministry of Petroleum & Natural Gas and 1 from Department of Consumer Affairs. The non-official members of the group include State Bank of India chief economist Soumya Kanti Ghosh, economist Surjit Bhalla, and Prime Minister’s Economic Advisory Council member Shamika Ravi, among others. 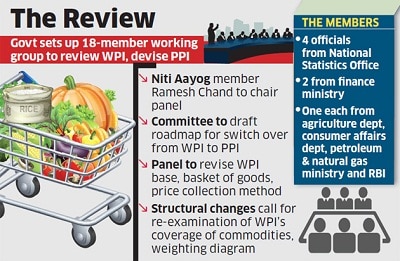 Background:
In 2014, The government had formed a committee under Professor BN Goldar to devise a PPI after the Reserve Bank of India began considering consumer price inflation as a better gauge of inflation than WPI. The panel had then said that the primary objective of shifting from WPI to PPI is to do away with the bias of double counting in WPI and to compile indices that are conceptually consistent with the National Accounts Statistics for use as deflators.

About Base year:
It is a specific year against which the economic growth is measured. It is allocated a value of 100 in an index. It is changed periodically to take into account the structural changes which take place in the economy. The first official estimates of national income were computed by CSO (Central Statistics Office) with the year 1948-49 for the estimates at constant prices.

About WPI:
It is computed by the office of the Economic Advisor in the Ministry of Commerce & Industry and it is released monthly. The items in WPI are divided into 3 categories namely, Primary articles, Fuel & Power and Manufactured products. It does not include services.

About PPI:
PPI measures the average change in the price a producer receives for his goods and services sold in the domestic market and exports. It shows the pressure on inflation from its origins as it does not include taxes like WPI does.