The government on 7 November approved the policy to blacklist defence companies which are involved in corruption and wrongdoing related to arms purchase.The government has decided to impose heavy fine on the blacklisted companies instead of blanket blacklisting, and complete banning would be the last option with no other choice left.

Other approval of DAC :

Tejas is a light weight fighter jet designed by Hindustan Aeronautics Limited (HAL) and Aeronautical Development Agency (ADA) for the Indian Air Force and Navy. These light combat aircrafts(LCA) were the replacement for MiG-21 fighter jets. LCA was officially named “Tejas” in 2003. 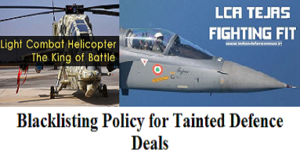 New features in Tejas Mark 1A

Pinaka multi barrel rocket launcher – Pinaka is a multiple rocket launcher produced in India and developed by the Defence Research and Development Organisation (DRDO) for the Indian Army.