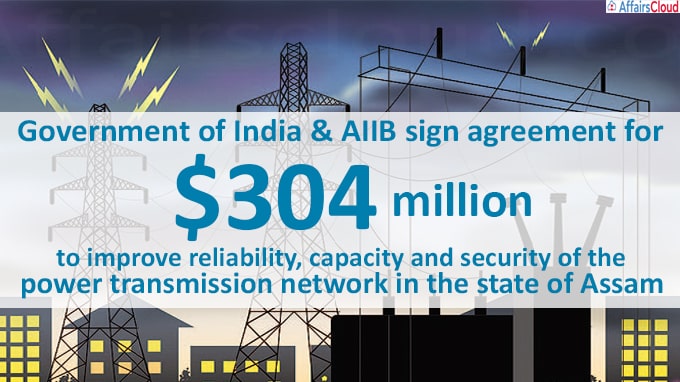 On February 24, 2021, the Government of India (GoI) and the Asian Infrastructure Investment Bank (AIIB) signed a loan agreement of $304 million (mn) for Assam Intra-State Transmission System Enhancement Project to strengthen the quality, capacity and security of the 24*7 power supply in Assam along with reducing greenhouse gas emissions.

How will Assam’s electricity transmission be strengthened under this agreement?

–By constructing 10 transmission substations and laying transmission lines with the associated infrastructure.

Need for this Project:

There is power deficit scenario in Assam due to congestion of the electricity distribution and transmission networks. Assam Electricity Grid Corporation Limited (AEGCL) is the sole transmission utility in Assam is responsible for the operation, maintenance and development of the transmission system in the State.

About Asian Infrastructure Investment Bank (AIIB)
India, which was among the AIIB’s 57 founding members in 2016. It is also the second-largest shareholder (with 7.62% voting shares) after China (26.06%) and  the largest recipient of AIIB’s funds.
Established in – 2016
Headquarters – Beijing, China
Member Countries– 103
President – Jin Liqun (China)